“Affirmative Action (known as employment equity in Canada and elsewhere) refers to policies that take factors including “race, color, religion, sex, or national origin” into consideration in order to benefit an underrepresented group “in areas of employment, education, and business”. The concept of affirmative action was introduced in the early 1960s as a way to combat racial discrimination in the hiring process and, in 1967, the concept was expanded to include sex.

The nature of affirmative action policies varies from region to region. Some countries, such as India, use a quota system, whereby a certain percentage of jobs or school vacancies must be set aside for members of a race, caste or other protected group. In some other regions, specific quotas do not exist; instead, members of minorities are given preference in selection processes.” (Source: http://en.wikipedia.org/wiki/Affirmative_action)

The article linked below addresses the issue of ‘affirmative action’ in considerable detail, but it’s well worth the effort to get a handle on this important issue:

The author is Louis Pojman, whose background and achievements are discussed at http://en.wikipedia.org/wiki/Louis_Pojman

That form of affirmative action that is most discussed today in the context of gender issues, is the imposition of quotas to ensure that a particular percentage of students/directors/politicians/etc are female.

Not surprisingly there are no feminist demands for quotas to be established in relation to any of the roles listed in the table below: (source) 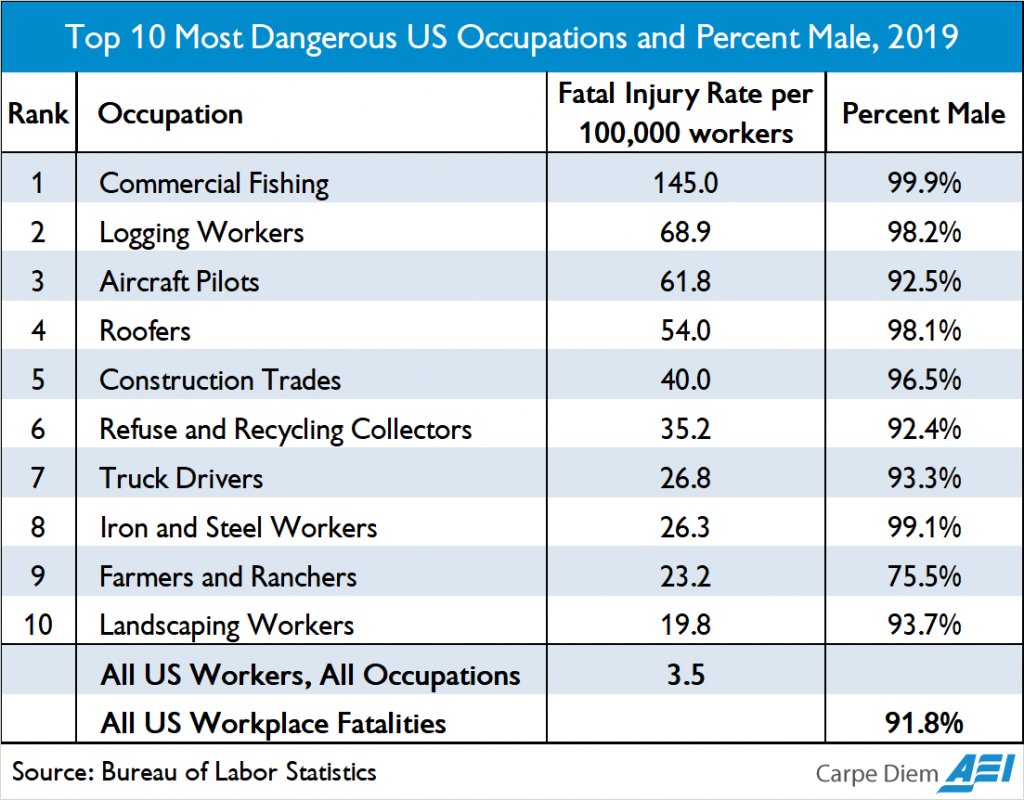 Queensland police discriminated against 200 potential male recruits in favour of women, report finds | Australian police and policing | The Guardian (12 May 2021)

Australian feminists in the NSW education sphere are unhappy having only 50% of senior staff being women, and want more (1 March 2020)

What’s next in social engineering? Gender quotas on motherhood? by Miranda Devine (3 May 2017)

The Increasing Significance of the Decline of Men, by Thomas B. Edsall (16 March 2017) Related Reddit discussion thread here. In a world where the goal of gender equality was genuine, the labor market for men would be a consideration in the debate about gender quotas. It’s never mentioned.

Should there be ‘bloke quotas’ in Australia to get more men into roles like teaching and nursing? (11 December 2016) Facebook discussion thread with linked article. This is the first time I have seen a feminist organisation propose quotas for men. One hopes they have finally recognised the hypocrisy of campaigning for (only) female quotas, though I suspect it’s merely a strategy to reduce resistance to female quotas.

The Deal: Women in favour of board quotas, feel held to higher standards than male peers (17 November 2016) Australia

The spread of gender quotas for company boards (25 March 2014)

Campaign for Merit in Business A UK-based web site maintained by Mike Buchanan where you will numerous papers related to the use of gender quotas in business, including:

Feminist mythtique in the boardroom (18 June 2014)

Less than 50/50 representation does not automatically imply ‘gender bias’

Companies with women at the helm perform better (so they say)