As with feminism, the non/anti-feminist sector has a number of discernible groups within it as shown in the diagram below. MHRA’s/MRA’s represent just one of these. Another significant subset of the mens movement is known as MGTOW (Men going their own way).

I once thought the Mens Rights Movement consisted of guys running naked together in the forest, or weird stuff like that. Maybe it was once upon a time, but back in those days I wasn’t paying much attention as I still thought that feminists had a valid point. Now, many years later, I can appreciate the chasm between the cuddly all-inclusive (we’re only interested in equality!) variety of feminism that’s presented in the mainstream media, and what the self-appointed leaders of this insidious movement are actually saying and doing.

The feminist/media portrayal of those people interested involved with mens rights is very much based on an image of ill-tempered, right-wing, portly and socially-inept white middle-aged men. In actual fact there is enormous diversity amongst MRA with regards to age, gender, and the political and religious viewpoints that are held. There is also a major division between the ‘trad-cons’ (traditional conservatives) and the those that believe that men need to create a new social construct based on egalitarian principles. This article by Dean Esmay discusses the tradcon perspective.

Interestingly, many MRA initially identified as feminists but then became disillusioned due to the hypocrisy and corruption of that movement. Warren Farrell was a high-flier in the feminist movement before becoming a pioneer and leading light in the mens rights movement, here he talks about certain aspects of this transition.

Both this discussion, and this article, are about the relationship between the Mens Rights movement and feminism and whether it is feasible to have a foot in each camp. This feminist blog post asks the same question (see also interesting comments about domestic violence late in the readers comments section). This reddit discussion, on the other hand, looks at how feminist women stifle input from men who join their movement.

The MHR movement involves men and women who are committed to taking action to address  the hypocrisy, deceit, and increasingly anti-male bigotry of current day feminism. Yes, I said men AND women. One of the refreshing things about most mens rights organisations and web sites is that ideas and input by women are welcomed and encouraged.

These two reddit discussion threads concern women who are sympathetic to the mens rights cause (thread 1 and thread 2), with both containing quite a number of interesting comments. This is a great article (August 2014) about women who are active in the mens rights movement, and here’s another.

Here is a BBC radio interview with Karen Straughan (September 2014), and here is a July 2015 video by Karen entitled ‘Why do MRA’s attack feminism?‘ Here is a video by a founding member of the Honey Badger Brigade which notes some of the differences between feminism and the men’s rights movement.

This article in Salon, on the other hand, does a hatchet-job on them, as does this article from Amanda Marcotte. But more on feminist views regarding MRA in other posts in this blog.

If you are new to the subject then this article entitled ‘An Introduction to the Men’s Rights Movement‘ (21 March 2015) is a good place to start. I would also recommend that you take a look at The Illustrated Empathy Gap web site.

There are also a number of other articles listed below concerning what the men’s movement is all about, and there are also many relevant web sites detailed on this page within my blog.

This article advises that CAFE Canada was subject to exclusion from the 2014 Pride Parade. Clearly feminist elements within the LGBT community applied pressure due to CAFE’s activities in advocating for men and boys.

This is a fabulous rebuttal (by Victor Zen) of a young feminist’s complaint that she felt threatened by the creation of a men’s rights advocacy group at her university. And here is a follow-up post by Victor.

One of the standard taunts of the feminist movement is that MHRA organisations are “hate groups”. They largely pin this claim on a statement made by an organisation known as the ‘Southern Poverty Law Centre’. Read this article by that organisation, and as always, be sure to look at the readers comments. Too bad, too sad, that the FBI recently distanced themselves from the SPLC.

In actual fact, mens rights groups have an exemplary record in relation to using non-violent means to make their point. Indeed in one recent situation, various branches of the men’s rights movement raised a reward in order to try to find a person who was alleged to have attacked a Canadian feminist. Various feminist groups were approached to match this amount, but chose not to do so.

Many men in western countries believe that their only choice is between celibacy and submitting to the gynocentric strictures of the society in which they live. For these folks an epiphany can occur via exposure to life within another different culture, and I think this is evident in some of the material links to this post about cross-cultural marriages.

The issue of why many men are having difficulty appreciating the social changes that are seeing men’s position in society being increasingly eroded, is addressed in this article. The other related factors slowing the growth of men’s rights activism are media bias, and feminist tactics such as shaming, censorship and disruption which have been reasonably effective in stifling open and organised group dissent up to this point in time.

Beyond ‘male privilege’. An interview with Rick Bradford (aka Will Collins), author of The Empathy Gap (30 June 2022)

Why would you stand up for men and boys? Milgram’s message of hope to male psychology (2 December 2021)

Why do so few MRAs engage in practical (offline) activism? by Jim Buchanan (26 August 2019)

State of the Manosphere 2018, by Rollo Tomassi

Can we discuss gender issues rationally? Yes, if we can stop gamma bias, by Martin Seager and Dr John Barry (4 December 2018)

It doesn’t look like anything to me: Confronting Willful Blindness Against Men’s Issues (14 May 2017)

To Feminists with Love, by Steve Brule (video)

The new gender agenda – A TedX talk by Glen Poole

Centuries of oppression (30 May 2016) Yes, that’s right, a post about that endlessly-repeated claim that men have had the upper-hand since time began.

The Red Pill: the movie about men that feminists didn’t want you to see (12 November 2015)

Why do MRA’s attack feminism? (7 July 2015) A video by Karen Straughan

Louder Than Words: What Modern Feminism Has Actually Achieved (3 June 2015)

Innocent until proven guilty. Unless you are a man (10 May 2015) Australia

Is Finding Equality Just as Difficult for Boys in the Current Climate? (16 March 2015)

Men’s rights movement: why it is so controversial? (19 February 2015) The article is rubbish but the reader’s comments informative

A Recent Manosphere Tactic: Fighting Fire with Fire (16 November 2014) Reddit mensrights discussion thread about calling out the hypocrisy of feminists and other SJW

The End of Men, by Hanna Rosin (July/August 2010 edition of The Atlantic)

In brief, men’s lives count only to the degree they are heroes who perform for us or save us, or villains who disturb our peace. Women’s lives count more for their own sake…a woman’s pain is every talk show.”

Not all is great in the world of men: a reference book of men’s issues

How can you be an anti-feminist? Do you not believe in equality? I have come across many lists like this, showing mens disadvantage in key areas, but never one this detailed.

http://www.avoiceformen.com/feminism/feminism-seeks-rights-without-responsibilities/ (Some historical context to the contemporary mens rights movement)

If you wish to keep abreast of men’s rights issues then a very good source to monitor is the reddit subgroup on mens rights. A few examples of the hundreds of discussion threads there are shown below: 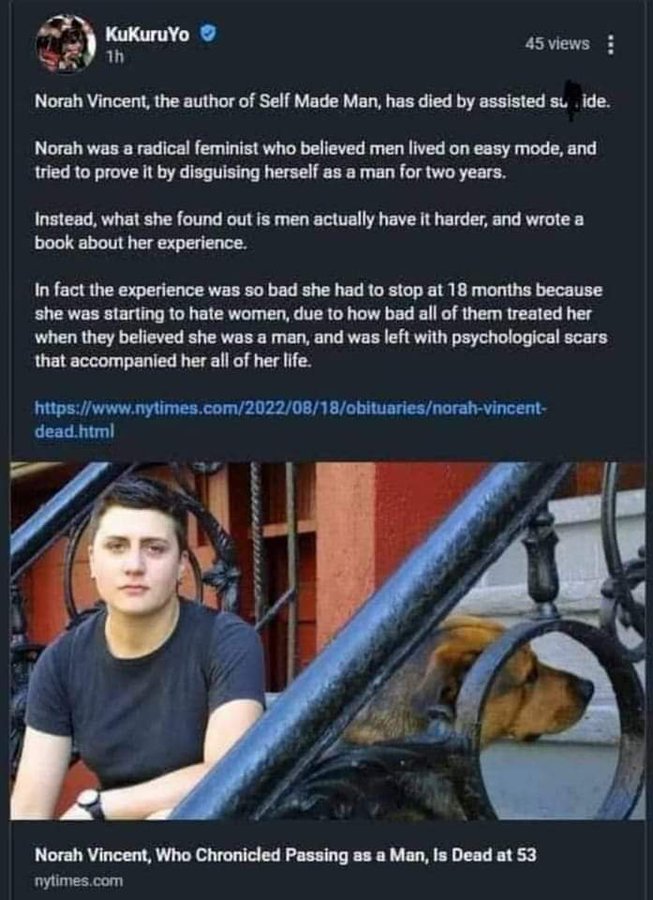 Finally, now take a look at this brief article which provides quite a reasonable middle-of-the-road discussion that includes good readers comments with links to further supporting information.