Until recently articles about women having trouble finding/securing dating or marriage partners were often quoted as querying “Where have all the good men gone?“. I talk about this in another post called ‘MGTOW and the Marriage Strike‘.

The rationale is that men are deficient in that they are failing in their responsibilities (to women) through their immaturity and/or by simply not trying hard enough to please. There is never a suggestion of any shortcomings on the part of women.

I’ve noticed we seem to be transitioning to a new meme, similar yet different to the last. In this one men are still deficient – they are now said to be playing video games instead of doing the work or study necessary to improve their educational/financial position.

We are told that educated women are complaining because, apparently, there are not enough “educated” men to partner with. Here’s an example of an article on this theme (with a response from an MRA here). As a consequence, these privileged women say, they must freeze their eggs and/or become solo parents by way of artificial insemination, etc.

Of course it would make sense to delve deeper into why men are staying home playing video games and/or are becoming increasingly under-represented in universities, but the debate stalls at the shaming stage. Because … still no suggestion of any shortcomings or blame on the part of women. (This blog entry illustrates what might otherwise be said and discussed)

I saw this program about solo parenthood on TV the other night. Interesting, though very much gynocentric in terms of the issues explored/presented. I saw women who had quite negative attitudes towards men and/or who freely admitted that they were not prepared to compromise in terms of any aspect of potential traditional pairings. On the other hand they were most willing to compromise their independent/empowered woman status when it came to having others around them support and/or subsidise their lifestyle choice.

The perspective of straight men and their attitudes and experiences was not addressed. Sperm donors who chose not to establish/maintain contact with their offspring were presented as insensitive cads. No hint was provided as to what other factors that might have contributed to their behaviour, for e.g. the possibility of being lumbered with eighteen years of child support payments.

Then I read firstly this article, then another, and another, these being just a few examples of a spate of pieces on this theme. As is often the case, there were some quite illuminating reader’s comments following each, including this offering:

“Feminism is already a dead woman walking. All feminism has is shaming language and the State (ironically, ultimately other men) to keep men to the feminist line.

These are genuine threat points for men in the modern world that didn’t exist before feminism. It speaks to the feeble minds of feminists that they would think that men will simply carry on as they did when these threats did not exist. For the last 50 years men (mostly) still did. But that’s over now.

So men are doing what they have always done: survey their environment, understand it, and behave rationally according to it. Which means, increasingly, living their lives without regard to what women want. This does not mean living without sex, relationships or female company. Just that the investment men make in all these areas is being dramatically reduced.

As feminism reduces the value of women (in men’s eyes), so men are reducing the amount of time, effort, attention and money they are willing to spend for the declining benefits modern women now bring to their lives.

And yet, women’s self-reported happiness, across all classes, all races, all demographics is lower than ever since records began 50 years ago. Tellingly, for the first time ever, their happiness is also now lower than men’s.

But you do not need to read ‘The Paradox of Declining Female Happiness’ to know this. Just talk to the increasing number of 30 and 40 year old childless spinsters one on one – not in a group – to get the REAL story. The REAL effect of feminism in the REAL world. These women don’t give two hoots about feminism, they are just wondering where all the good husbands, hell, ANY decent man, went.

Mostly, disgusted with what feminism has done to women, he walked away.

For the truth is that men don’t want to fight women, it goes against the core of what it means to be a man. But feminism thrust men into a fight that they neither started nor wanted. To the point that feminists are reduced to crowing about ‘winning’ battles that men never turned up for.

And even now, as feminism pushes and pushes and pushes to ever more absurd levels, as ever more restrictions are placed on normal masculine behavior, ever more insane definitions of ‘rape’, ‘assault’, and ‘aggression’ are drafted into law in increasingly desperate attempts to somehow, anyhow, cast women as perpetual victims – even now – men are still refusing to be drawn into a real battle.

That’s how deeply men do not want to fight women.

The sound of the final battle between the sexes will not be heard in the streets or legislatures. It will not be televised or reported. There will be no flags hoisted or victory parades. Because it is already in progress. It is happening all around us in plain sight, for those with the eyes to see it.

And men are deploying the most devastating weapon of all – indifference. In this final battle who cares least wins.

The time has come to reap the harvest of feminism, and for women the fruit will be bitterest of all.”

And here is further evidence of the feminist hive-mind in action with another series of almost identical articles on a related theme – young men allegedly addicted to video games:

On Tinder, only women have a preference for highly-educated partners (24 July 2019)

Unemployed and don’t care: why young men aren’t working (1 April 2017) A sexist hit-piece in a professional journal of all places. The author wilfully confuses cause & effect when discussing unemployment amongst young men. See reader’s comments including:

Will Darwinism kill Feminism? (7 July 2017) A great offering on the issue from Martin Daubney

Meet the women who believe they’re ‘too hot’ to land a date (6 April 2022) What a joke – so if the fault isn’t some lack on the part of the guys, then it must be that the women are (drumroll) too wonderful … or both of the above!

The game of marriage chicken, by Bettina Arndt (3 March 2022)

What is hybristophilia: Why women are attracted to killers like Chris Watts | news.com.au (7 September 2021) On a contrasting note, apparently some women prefer traits other than high education.

Women admit that marriage is prostitution, and they like it that way (10 September 2019) Another worthwhile video in the ‘Regarding Men‘ series

‘Marrying up’ is now easier for men, improves their economic well-being, study finds (28 August 2017) I think they really mean ‘marrying up should now be easier for men’. And again, if the genders were reversed, there would certainly not be the same meek acceptance of the women being failed by the education system.

The Mating Crisis Among Educated Women, by David M Buss (January 2016) USA. An article written by a male academic, but from a wholly gynocentric perspective.

Rich educated women cannot find husbands and it’s all your fault,  by Sargon of Akkad (10 May 2015) Video

Where are all the smart men? (3 May 2015) New Zealand with related reddit mensrights discussion threads here and here. A separate, and even more ignorant editorial here concludes with “The failure of men to foot it with them educationally in equal numbers is no reason to change the education system or promote men undeservedly. The shortage of partners for highly educated women is a problem only men can solve. Get your credentials, boys.” 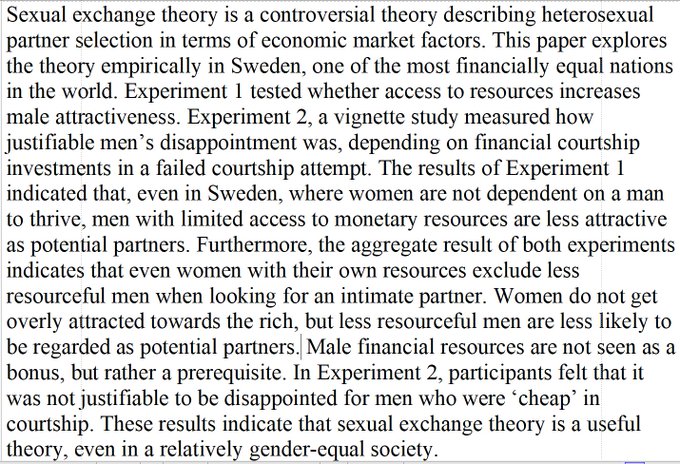 (Source of the above block of text)

Some other related posts within this blog:

On boys and education
Men & women and their attitudes to marriage and parenthood
How men are portrayed … Haw Haw Haw! The jokes on us
We’ve all heard of the gender ‘income gap’, but what about the ‘expense gap’?