TLDR: I provide the following post for the interest of those sympathetic and/or active in promoting MRA, rather than to provide some kind of a ‘slap in the face’ to those opposed to it. So, based on my experiences to date, do I think that there is a net benefit in interacting with feminists and/or White Knights on social media? My answer to that is an unequivocal ‘no’.

I have noticed some MRA’s spend a great deal of time providing information and/or trading barbs with feminists online. My own online interactions with feminists and their allies have been singularly unproductive. They very rarely provide interesting alternative perspectives or leads to useful sources of information. Instead they offer a narrow and predictable range of ad hominem barbs and child-like taunts, often immediately followed by blocking you.

After these exchanges I get the feeling that I have achieved nothing more than diverting time and energy away from those other things that might have been tackled in the limited time available – for example, targeted lobbying, preparing submissions, etc. Occasionally I’ve also had to expend further time afterwards dealing with subsequent unfounded/exaggerated complaints to moderators, Facebook, etc.

It’s for this reason I prefer to contribute in public forums (e.g. online discussions of articles in MSM) where I try to raise awareness amongst the general public of specific men’s issues, and of related sources of information. Here you find many ‘fence sitters’, who are somewhat curious about gender issues and open to new ideas.

But perhaps if we look at a couple of case-studies:

In this first example what began with a little banter in relation to one of my blog posts, ended with a door slam. 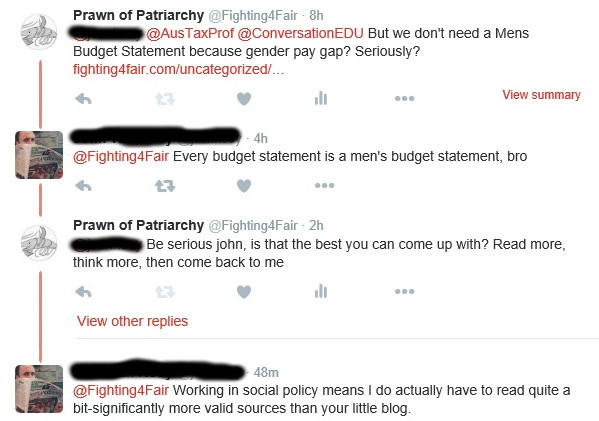 This second example demonstrated pretty much the same pattern as you can see in these few screen grabs:

Anyway I thought I’d take this opportunity to put the question to far more seasoned campaigners than I … once you add up all the time and energy spent dealing with individual feminists, is there a net benefit to be had? Were they interested in your facts? Have you won over any hearts and minds?

Or have you just found yourself, time and time again, switching off your laptop late for dinner … tired and frustrated and thinking that there must be a better way?

2 thoughts on “Advocating for men/boys online: Is there benefit to be had in one-on-one interaction with feminists online?”