Female aggression is now increasingly being portrayed and seen as acceptable, and almost a hallmark of an empowered woman. Look for example at some of the speeches made by female celebrities following the election of President Trump in the USA.

The feminist logic appears to be:

An example of this ‘it’s different when women do it’ argument can be found in this delusional post by a feminist.

In an earlier article entitled ‘Jennifer Garner: Why I Wanted My Girls to Take Karate‘ (20 November 2014), one of Jennifer’s goals for her daughters is for them “to be able to kick a guy’s ass“.

Ms Garner’s comments aren’t unusual – I have simply chosen hers as but one example of a long line of articles/comments that I have read expressing similar sentiments. This is the flip-side of a culture increasingly being moulded by feminist organisations like ‘White Ribbon Campaign’, whereby female aggression is downplayed or completely ignored whilst male-perpetrated violence is exaggerated.

In July 2014 Whoopi Goldberg started a feminist firestorm with her comments on a US talk show in which she said that women should not hit their partners, and that if they did they should not be surprised if the man hit them back. Feminists have misrepresented Whoopi’s position as being one of supporting men who hit women, but in fact she just said that she supported the position of the innocent party who was hit first (whether that be a man or woman). Her position was that neither party had the right to hit the other.

Inherent in this discussion is the view amongst many feminist women that because men are bigger/stronger [which is not always the case] that men never had the right to hit women, regardless of whether the woman struck the first blow. The video clip of Whoopi’s statement is here, and here are some discussion threads and articles: Vfm article by Paul Elam, VfM discussion thread, reddit #1.

David Webb also attracted criticism for daring to suggest that women shouldn’t hit their husbands and boyfriends. Feminist journalist Barbara Ellen thinks that women hitting men is ‘different’ and OK. Kelly Brook thinks hitting her boyfriends is OK, too. Finally the issue was nicely summed-up in this article, with which I wholeheartedly agree. 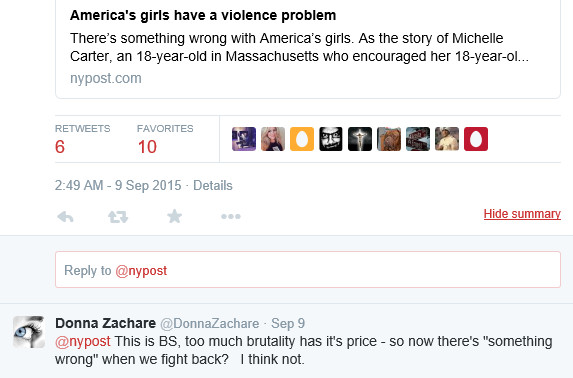 Before you laugh, imagine it happened to a woman (4 October 2020) and a link to a related Reddit discussion thread

Twitter discussion thread regarding the excuse of ‘just a slap’, beginning with assertion by UK feminist organisation ‘Refuge’ that it is used to minimise violence against women (23 June 2020)

“I kick balls – deal with it”. Slogan used by ‘Sport England’ to promote women’s sport (April 2019) Scroll down to read about a similar 2017 Australian campaign

I did a social experiment, male versus female (16 November 2017) Reddit discussion thread

“It doesn’t matter what the circumstances, you don’t punch women, ever”

Swiss feminist on state TV: “It’s okay for women to beat their husbands if they are being stupid (13 June 2017) Reddit discussion thread

Sickening moment bouncer punches woman in the face outside Liverpool bar (18 April 2017) UK. Woman attempting to hit bouncer = not sickening, but bouncer defends himself is.

Woman punches man at Trump rally. Man punches her back. Media reports it as him sucker punching her. Only explanation to describe it as a “sucker punch” is her believing that she wouldn’t get hit back. (18 April 2017)

I have a short story that has seriously wrecked my mood for a week now, and I need to get it off my chest (14 January 2017) Reddit discussion thread

In fiction, girls painfully slap their boyfriends and it’s portrayed as comedic, righteous and deserved. But when a guy does something like grab her wrist that is not nearly as painful, it’s portrayed as dark and abusive (26 December 2016) Reddit men’s rights discussion thread

Why ARE modern women so aggressive? It’s been called the dark side of equality – a surge in respectable women flying into violent rages for the most trivial reasons (15 September 2016) with related Reddit discussion thread here

“In 1957, men were responsible for 11 violent offences for every one perpetrated by a woman — today, that is four to one”

‘I Had to Be the Voice of Women’: The First Female Hijacker Shares Her Story (4 August 2016)

I hit my boyfriend first, then he hit me back a lot harder, worse, and more, should I forgive? (August 2015) See comments

When it comes to MMA star Ronda Rousey, is there a domestic violence double standard? (12 November 2015)

Footage shows Indian woman body-slamming man at train station (4 March 2015) Reading between the lines here, there is no reason to assume that this was not simply an unprovoked act of violence by the women … except feminism

Wife chops off cheating husband’s penis, twice (14 January 2015) Somehow I don’t think a story about a man cutting off his wife’s breast would be given the same whimsical treatment as per this article

Have you ever beaten up a boyfriend? Cause, Uh, we have an article that appeared in Jezebel in August 2007, with commentary/rebuttal by MRA Janet Bloomfield (and here) 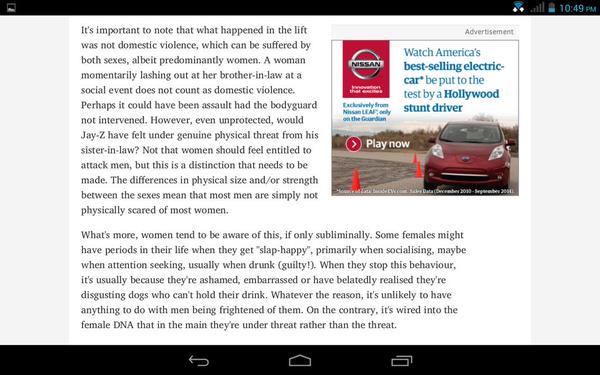 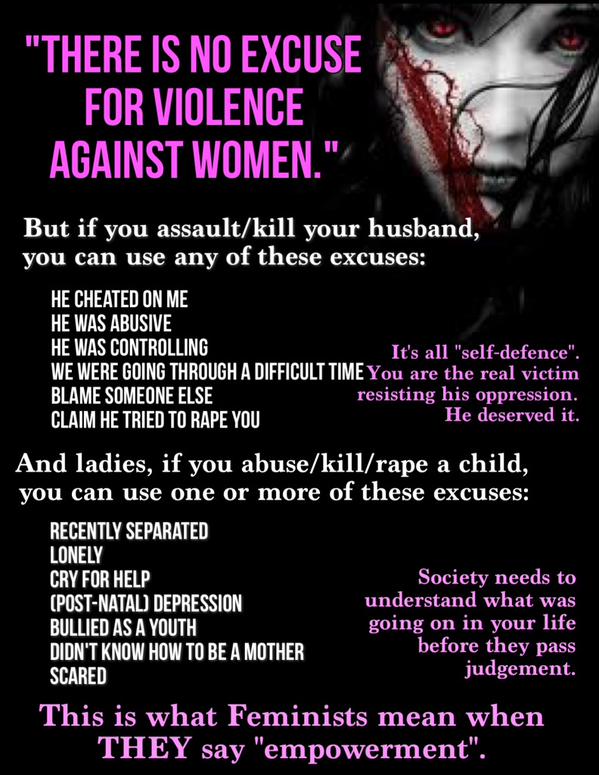 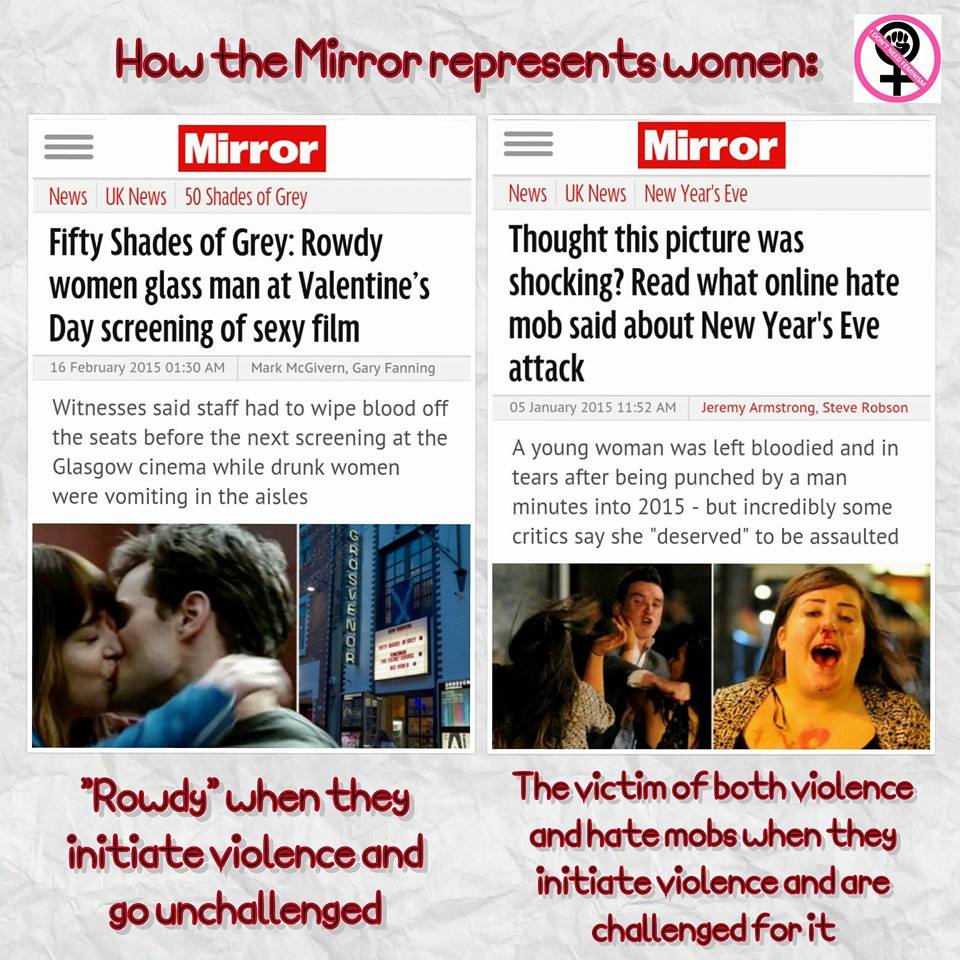 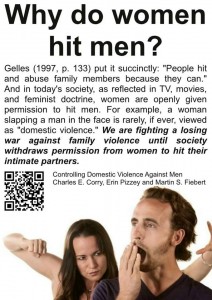 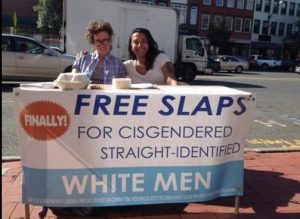 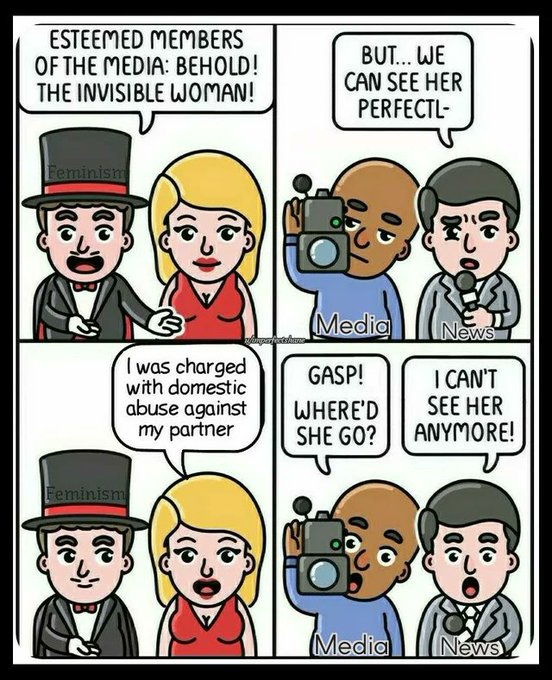 Other posts in this blog most closely related to this topic:

Differing public response to partner violence depending on gender of victim

How men are portrayed … Haw Haw Haw! The jokes on us

Regarding the notion of ‘Ironic Misandry’