(NB: The following post is intended as a companion piece to Fudging the figures to support the feminist narrative)

1. Feminist ideologues use either patently false statistical ‘information’ or misrepresent genuine statistical sources to make a case is support of one or more aspects of the feminist narrative. Alternatively, feminists resist efforts to correct outdated and/or unrepresentative methods of data collection in the knowledge that enhancements to data collection would work against their inbuilt bias.

2. Feminists get ‘called out’ enough times – in public and by suitably authoritative sources – to feel the need to manipulate data collection and/or presentation in order to continue to present a version of reality which reinforces rather than undermines the feminist narrative. Because remember, a lessening incidence of rape (or domestic violence/online harassment/workplace harassment/etc) not only undermines the credibility of the feminist narrative, but also weakens the case for feminist groups to receive additional government funding.

Question: What do you do when available statistics don’t support the image of men as empowered aggressors and women as powerless victims, that is carefully cultivated by the feminist movement?

Answer: You change the rules and/or move the goal posts.

And so a favored strategy is to raise the bar as to what constitutes victimization of men, whilst lowering the bar in relation to women. Thus the position that men cannot be raped, or (begrudgingly) they can but only if penetrated by an object. For women however, a sideways glance or accidentally brushing past someone in a crowded bus equals sexual assault.

The case of domestic violence: Early domestic violence definitions focussed on physical violence, and feminists run hard up against two problems here. The first problem is that the incidence of violent crime in western countries has, overall, been decreasing in recent decades. (Though paradoxically, violence by females is actually increasing). This makes it potentially awkward for feminists to continuing using terms like “a growing epidemic of violence against women“). The second problem for feminists is the increasing availability of independent unbiased research which has consistently found that there are as many female as male aggressors using the physical violence criteria. Gender parity in domestic violence undermines the feminist perspective. Whatever can we do?

A ‘good’ example of this is the section of IPV within the ‘Australian Longitudinal Study on Women’s Health’:

“Forty-five percent of women aged 18 to 23 reported some form of IPV, with 12% reporting one form of abuse, 8% reporting two different forms of abuse and 25% reporting three or more forms of abuse. The most common forms of IPV were being told they were ugly, stupid or crazy (28%), being harassed over the telephone, email, Facebook or internet (25%), and their partner trying to keep them from seeing or talking to friends or relatives (18%).” (Source) Clearly casting the net very wide to capture more ‘victims’, with this effect being accentuated through the use of very subjective criteria.

In another example, I was reading this article and noticed for the first time the use of the term “implied domestic violence“. I then googled on the term seeking background and/or a definition, and came across this:

“Credible threat, according to this new law, means a verbal or written threat, or a threat implied by a pattern of conduct made with the intent and the apparent ability to carry out the threat, so as to cause the person who is the target of the threat to reasonably fear for his or her safety or the safety of his or her family.” (Source)

The muddier the water the better, for intangible and subjective criteria makes future correction/undermining of data more difficult. We’ll have those silly MRA running around in circles for years trying to prove we are wrong.

Voila! Data adjusted on the basis of newly revised definitions of domestic violence magically skews the role of aggressors very firmly back towards men. Yay feminism!

‘Understanding domestic abusers’ (undated) from the New York State Office for the Prevention of Domestic Violence. See “responsive violence”. Sure women are violent but only in order to “attempt to forestall attack, defend self and others, or control the situation”

More than one in three victims of domestic abuse are now men (10 December 2016) UK. Refer comments by Polly Neate

A flood of DV insanity and doublespeak (4 December 2014)

The case of sexual assault: Feminists are active on at least two fronts here to build on, or at least to maintain, the current status quo:

1. With regards to the sexual assault of women they are continually seeking to stretch the boundaries of what constitutes sexual assault in order to artificially ramp up the perceived incidence of this crime in the face of declining perpetration. Google on “stare rape” as an example of how ridiculous their assertions can be. 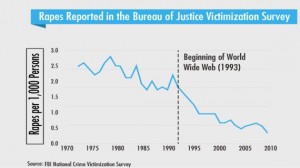 2. With regards to the sexual assault of men, feminists are resisting the efforts of men’s rights activists to ensure that official statistics include the many men/boys raped in jail (by both men and women) and to ensure that male rape statistics include incidents of acts currently designated as ‘forced envelopment’ or ‘made to penetrate’ rather than as rape. They do so, at least in part, because they know that if rape was defined as all ‘forced/unwanted intimate sexual activity’, then there would be gender parity. Again, to preserve the image of female victimhood, feminists must ensure that the definition of rape remains limited to sexual activity involving ‘forced penetration’ (i.e. excluding ‘forced envelopment’ or ‘made to penetrate’).

Another relevant aspect of this debate is that many feminists simply don’t recognise that men can be raped, it being their view that ‘men always want it’. Some women also incorrectly believe that the very fact that a man has an erection (necessary for vaginal penetration) is proof of his consent.

Scroll down to see the definition of ‘sexual violence’ on this page. It includes  “withholding sex and affection” yet how many times have I read in feminist web sites that men are never “entitled” to sex from their partner? Double-standard much?

Mary P. Koss considers it “inappropriate” to consider men who have been raped by women as rape victims, and prefers to call it “unwanted contact” instead. See related reddit discussion thread here (27 December 2015) USA

How official rape statistics are distorted and inflated, by Angry Harry (August 2014)

See http://www.reddit.com/r/MensRights/search?q=cdc+definition+rape&restrict_sr=on which includes threads such as:

Child custody: “As detailed in John Hirst’s groundbreaking 2005 Quarterly Essay, Kangaroo Court: Family Law in Australia, the legal tactic employed was to make false accusations of child sexual assault against the father. Based on unproven allegations of abuse, the Family Court would decide that a child could be at risk of harm and withdraw the father’s limited access visits.”

The situation for fathers subsequently improved due to family law reforms introduced by the Howard Government. Women’s groups, with the help of sympathetic lawyers and academics, then began lobbying the subsequent (labor) government to water down the earlier reforms. They complained that women and children were being forced to have contact with violent and abusive fathers. At least six reviews were commissioned to prove this “fact”, yet none of the subsequent reports contained evidence that shared parenting was exposing women and children to harm.

“The Gillard government has got around this by deciding to redefine family violence. The Family Law Legislation Amendment (Family Violence and Other Measures) Bill 2011 has expanded the definition to include psychological harm, financial abuse and other threatening behaviour that controls, coerces or causes fear. Significantly, the government has ruled out requiring that fear of family violence be “reasonable”.

Based on past experience in the Family Court, the expanded definition will create a new and open-ended legal means by which good fathers are banished from the lives of their children. There also no longer will be any penalty (no cost orders) for knowingly making false allegations, and the friendly parent provisions, requiring parents to be supportive of each other’s role in their children’s lives, will be substantially diminished.” (Source)

The case of workplace harassment

References that further demonstrate the above points can also be found in the my blog posts on the relevant topics (links provided below), and when I get a moment I will extract them and add them into this post.

Domestic violence is not a gendered issue – Why the pervasive sexist bias against men?