The nature of child abuse

Sexual abuse of children, the least common form of abuse, is mostly committed by men. Although note that there is no shortage of female perpetrators. Neglect of children is mostly committed by mothers, reflecting the fact that they are usually the primary care-givers. Female perpetrators tend to dominate the other two forms of abuse, although there are significant variations (and gaps in data) between different studies. Links to sources of statistical data concerning the perpetration of child abuse are provided below.

Child abuse, where it occurs within the home, is itself a subset of a broader range of destructive behaviours known as domestic violence.

Domestic violence is not a gendered crime, although most feminists believe otherwise and never stop telling us so. They justify this position on the basis of their claim that domestic violence is overwhelmingly perpetrated by men against women. But if we were to accept that, then surely child abuse and neglect must also be a gendered crime given that the majority of the perpetrators are female and the majority of victims male? Further, why isn’t perpetrator gender nearly such a big issue in the child abuse debate, as it clearly is in domestic violence?

I would draw the readers attention to an article entitled ‘Abuse and neglect: Australia’s child protection ‘crisis’’ published in ‘The Conversation‘. An interesting thing about that article was that it never mentions the issue of gender. This contrasts strongly with articles that ‘The Conversation‘ has published about domestic violence, wherein gender is invariably the central theme.

I submitted a comment in relation to that article – pointing this out – but it was removed by their moderator within minutes. As an aside, that’s entirely typical of the censorship that takes place at that web site.

Could it be, as some have suggested, that researchers move the goalposts depending on whether the relevant information alternately supports or undermines the feminist narrative? The issue of the corruption of gender-related research is addressed in another blog post.

How about we start telling it like it is? Most child abuse and neglect is perpetrated by women, and women should acknowledge this and deal with it the same way they harangue men to take ownership and deal with domestic violence, i.e. tell all your friends it’s wrong. Though the impact of that approach, in isolation, is unlikely to amount to much in the way of a reduction in abuse.

Perpetrators of domestic violence expose their children to the unhealthy experience of seeing and hearing abuse taking place, thus this behaviour is itself a form of child abuse. Pro-feminist advocacy groups and journalists sometimes offer up statements such as “25% of young people have witnessed physical domestic violence against their mother”.  As always, the lack of comparative data for male victimisation is a sure-fire indicator of sexist bias.

The actual situation, as identified by ‘One in Three‘ is:

See also ‘Why aren’t we talking about abusive mums?‘ by Corrine Barraclough (15 June 2017)

It is of great significance that victims of child abuse, be they male or female, are much more likely to become perpetrators of not only child abuse, but also domestic violence, upon reaching adulthood. Thus abusive women are guilty twice over. In the first instance they abuse their partners and children, turning their lives into a living hell. Then, assuming their abuse doesn’t lead to murder or suicide, those children grow up and have children who they abuse – thus perpetuating an inter-generational cycle.

We should be giving equal emphasis to combating all forms of domestic violence including child abuse and elder abuse. Instead because of the inordinate degree of influence by the feminist lobby, the government is concentrating all of its effort on reducing violence against women based on the flawed claim that DV originates from the disrespectful attitudes of men and boys.

I believe that, were we to take a broader and longer-term view of the DV issue, then we should be placing far greater emphasis on women’s role in perpetrating child abuse. This would see, for example, the provision of more behaviour modification programs for abusive women with the aim of reducing the level of domestic violence in both the current and subsequent generation.

As previously noted, many statistical sources regarding child abuse (esp. in the past 5-10 years) don’t detail the gender of the perpetrator. This problem was identified in this Australian study for example. This is rather curious given that gender is promoted as the pivotal issue in the sphere of domestic violence research. Of course there the majority of perpetrators are male and thus entirely consistent with feminist dogma.

This U.K article notes that “mothers are the “unseen force” behind so-called honour-based abuse, inflicting violence on their daughters” and that “of the 100 “honour” crimes she studied, 49 involved mothers – but this was often not recorded in crime reports.”

FactCheck Q&A: does Australia have some of the highest rates per capita of fetal alcohol syndrome in the world? (18 April 2016)

Child Maltreatment 2012 Department of Health and Human Services USA. Refer table 5-3. Other reports in this series can be found here.

Reddit discussion threads on the issue of perpetrator gender, included here as they contains links to further statistical sources of note:

“The Western Australian figures shed light on who is likely to abuse children in families and are in line with overseas findings. The data show there were 1505 substantiations of child abuse in WA during the period 2007-8. Natural parents were responsible for 37% of total cases. Of these, mothers are identified as the perpetrator of neglect and abuse in a total of 73% of verified cases.”

Some specific incidents of child abuse:

Cops release photo of woman who punched 2-year-old boy on subway (23 February 2021) Read the article … no criticism of the perpetrator, but bystanders were blamed for not getting involved.

Boy traumatised after neighbours act out at noisy kids (19 August 2020) See how far you have to scroll down to find out the horrible neighbour was a ‘she’. Curious that

Monster mum ‘tortured and beat son, 2, so horrifically all that was left of him was his leg and liver’ (1 November 2019)

We lost the battle but we’ll win the war: Father of little girl who was brutally attacked by own mother …  (27 April 2018) Australia

Lesbian couple who beat their 5-year-old son with a hammer, duct-taped his eyes shut and kicked him in the groin in a brutal attack that caused him to suffer two strokes are jailed for 20 years (21 September 2017)

Kolkata Teacher Brags About Molesting A 10-Year-Old Boy, Accepts She Is A Pervert (23 March 2017) India

Girl, eight, allegedly bashed to death by grandmother wrote ‘I hate this life’ in her diary (3 March 2017)

Toddler starves to death and his sister, two, is left alone with the body for three days after their mother leaves them without food to spend nine days with her lover (8 December 2016)

2 Wisconsin women charged in death of 7-year-old who was starved, burned and beaten (3 December 2016)

Mother found guilty of allowing death of baby at hands of boyfriend (29 July 2016) The headline tries to diminish responsibility of mother – the mother did not merely “allow” the death, she was an active participant in the abuse and was also charged with murder. Pussy-pass?

What do I do? Wife verbally abusive and now starting to get physical with toddler (13 May 2016) Reddit discussion thread

Double Jeopardy on Sunday Night: Will baby Chloe’s killer ever be brought to justice? (4 April 2016) Australia

Single mother, 35, is arrested for ‘putting her two-year-old daughter in the oven, leaving her with third-degree burns’ (21 March 2016)

Mother Stabs Her Baby 90 Times With Scissors After He Bit Her While Breastfeeding Him! (8 March 2016)

Vacaville woman convicted of having sexual relationship with young boy (8 March 2016) USA. It was her own son

Lesbian couple ‘beat one woman’s 5-year-old son with a hammer, duct-taped his eyes and kicked him in the groin until he bled and suffered two strokes’ (14 January 2016)

Psycho woman goes on a rampage with 2 children, father doesn’t do anything (15 June 2015) Video

Woman accused of putting her newborn in plastic bag, leaving it in her desk drawer (27 April 2015)

B.C. woman put superglue in baby nephew’s ears because she was jealous of son-bearing in-laws (8 April 2015)

Mother used one-year-old baby as weapon in Alice Springs street fight (21 March 2015) Features the comment “Women who are victims of domestic violence should seek help from relevant support agencies long before it reaches such a crisis point.” Of course she’s a “victim“, rather than a perpetrator … she’s a woman, right?

“Listen to their screams…”: Mother’s chilling phone call to husband ‘as she burned their three daughters alive’ (12 February 2015)

An article informs us of the considerable danger caused by dads drinking, but neglects to mention the (even greater) danger caused by mums drinking (17 February 2019) and subsequent Tweets from Bettina Arndt (and another).

Why do mothers abuse children? It must be the fathers, so says the US government (28 June 2016)

Children are the forgotten victims of family violence, by Jeremy Sammut (7 December 2015) Australia

Child-killer parents should have subsequent children taken away: coroner (10 April 2015)

Most of this blog post concerns killings by women, but child abuse is addressed towards the end (13 October 2014)

Some people have suggested that feminist ideologues using pre-pubescent girls in expletive-laden videos to further their cause is also a form of child abuse (commentary here and here). Another one is seen when feminist mothers bemoan the fact that they are rearing a male and map out a path of indoctrination, see this article for example.

Other related posts within this blog include:

Regarding female perpetration of paedophilia and underage sex

The often contrasting reaction when mums and dads kill their children 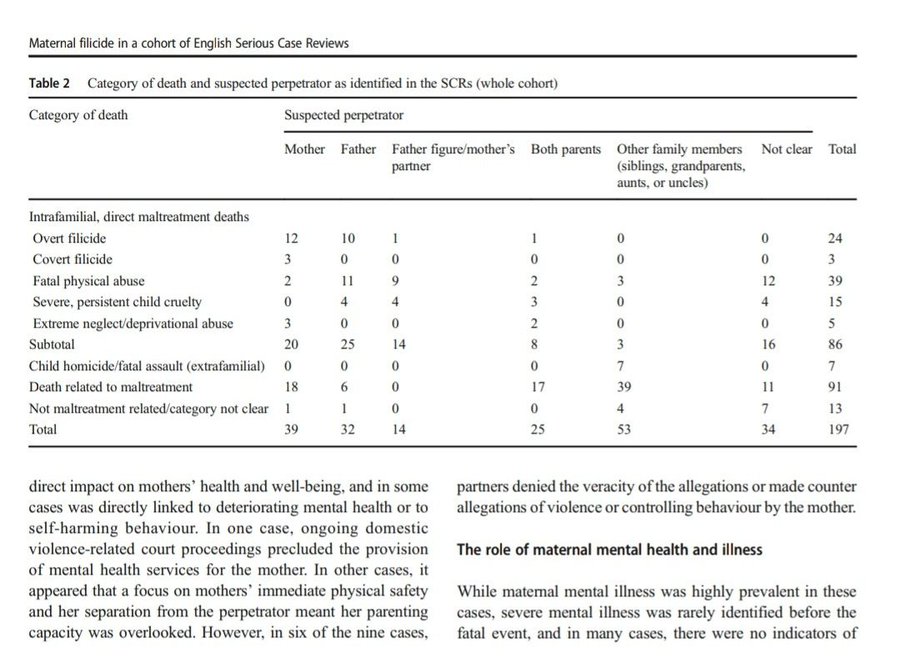