I would suggest beginning your exploration of this very important topic by viewing this video. Next I’d recommend reading this more recent article.

Then perhaps have a look at http://www.city-journal.org/2013/23_4_boy-trouble.html, and particularly the comments contributed by readers. It’s about the trouble many boys experience in school, and what one feminist researcher sees as the key contributing factors. As usual, apparently men and boys are to blame … with women just a gentle benign influence floating somewhere on the periphery. Umm, no, why am I not convinced?

Please peruse the following articles to see what people are saying about boys and education:

Opinion | What We Are Not Teaching Boys About Being Human – The New York Times (nytimes.com) (6 August 2021) Not a one-sided coverage of the topic … much!

The Intersectionality of Race and Gender in PUSD and California Schools (google.com) (6 June 2021)

Villanova College responds as students seen in ‘offensive, extremely misogynistic’ video | The Courier Mail (17 May 2021) The pro-feminist media takes yet another whack at private school boys

Australia’s top private schools and the wave of sexual assault allegations against their students (smh.com.au) (15 May 2021)

Sexual assault against boys is a crisis (22 February 2021) USA

What are boys and girls? (13 April 2020) Sexism against boys is different

Question for academics. For all the gender gap talk on campus, do you ever see any concern about males making up smaller percent of students overall and especially in certain fields? Or decreased male participation rate in labor force? Or potentially related social ills? (5 December 2018) Twitter post & reader comments

Boys ARE disadvantaged with education and mental health (29 November 2018)

Are Males Being Discriminated Against On College Campuses? (12 November 2018)

The War on Masculinity in Schools: A Growing Epidemic? (22 October 2017)

Panic about male teachers quitting obscures key factor: what about women? (20 September 2017) Read the bizarre way a feminist journo interprets the problem of men leaving the teaching profession (the readers comments are better)

Both of the above sources ignore the issue of male teachers being concerned about false accusations of child abuse, and of harassment/gossip/discrimination in what are now sometimes overtly feminised workplaces.

The new minority on campus? Men (8 August 2017) USA. And again, the default response to men/boys being disadvantaged is to blame them. Not gender bias and gynocentrism in the education system. Nope it’s that boys need to be made to recognise the value of a college education. 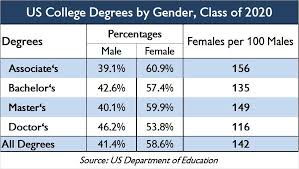 The feminization of everything fails our boys (9 May 2017)

Memo to Our Sons and Grandsons: The Future Is Female (2 March 2017)

Girls not believing they’re smart enough is our main education problem (23 February 2017) Australia. Looks like we have it all wrong and actually girls have it far worse. Yeah, but nah. Author even looks to the wage gap as proof of her assertion … lol … absolutely compelling. And yet many readers are apparently unconvinced.

Girls feelings are far more important than the truth, by Mark Dent (12 October 2016)

Corporal punishment is still legal (and used) in US public schools in 19 states – Used disproportionately on black children, boys, and children with disabilities (5 October 2016)

Manhood is caught in a gender agenda (4 October 2016) Australia

Acceptance for boys dropping out (26 September 2016)

“So it is not enough to make husbands the bad guys, now that so many households are fatherless, let’s make sons the bad guys?” (Source)

How to help boys do better at school: stop giving them a leg-up in the outside world, by Jane Caro (15 August 2016) Australia. One of those articles that fill you with disgust for feminists and particularly, feminist journalists. This harpy happily uses children (boys) as pawns in her pathetic effort to prop up a failed and deceitful ideology. See related Reddit discussion thread here. See rebuttal from Claire Lehmann here

Women, Calculus, and the Gender Discrimination Claims that Don’t Add Up (8 August 2016)

Girls power up for fast learning (19 July 2016) Australia. Girls “try harder to meet teachers’ expectations” (most of whom are women), and are “more likely to enjoy school“. No questions asked as to why that might be the case, just more of the same ‘boys as defective girls’ meme. See actual research summary here.

My affirmative action for women in my workplace, by Jennie Hill (15 July 2016) Australia.

“This year, the thing I’m most proud of is that I’ve brought in an affirmative action plan for women at my workplace. Let me explain.…” Feminist teacher proudly tells readers how she discriminates against boys … it’s her private blow against the patriarchy etc. See related Reddit discussion thread here.

“What message is this sending to the millions of boys not just in the UK and the US, but across the globe, who are struggling at school, or being kicked out altogether?

The betrayal of our boys: They’re falling behind girls in almost every way. And, says SARAH VINE, the feminisation of society, especially our schools, is to blame (26 May 2016) UK

There are fewer males at university, so should they be an equity group? (7 September 2015) Consider these arguments about why the low & falling rate of male enrolment in universities should NOT be addressed, and then do a gender reversal and consider how feminists would react (think female CEO’s or politicians for example). See related reddit discussion thread here.

Parents public shaming of girls Vs boys (21 May 2015) Video. Observe the different reactions

We must stop indoctrinating boys in feminist ideology (20 July 2015)

Where are all the smart men? (3 May 2015) New Zealand with related reddit mensrights discussion threads here and here. A separate, and even more ignorant editorial here concludes with “The failure of men to foot it with them educationally in equal numbers is no reason to change the education system or promote men undeservedly. The shortage of partners for highly educated women is a problem only men can solve. Get your credentials, boys.”

Girls thrive in single sex schools because they do not have to impress boys, head says (27 April 2015) and related reddit mensrights discussion thread

The Weaker Sex (7 March 2015) in The Economist. Be sure to study the reader’s comments – there’s some good ones!

Education, emasculation and equality: A letter to Yvette Cooper (14 February 2015)

Boys are more likely to play up at school, but it’s more social than biological (14 January 2015) Just the title is sufficient to flag yet another gynocentric pro-feminist view of education

‘Men don’t have problems, they cause them’ is not the only politically correct thing you can say about men (19 November 2014)

Female teachers: The sex offenders no one suspects (17 November 2014)

Teacher Nikki Suydam: “Criticism of teachers is misogyny because most teachers are women!” (17 November 2014)

Opinion: Why schools are hemorrhaging male teachers? It’s time to address the elephant in the classroom (3 November 2014) Australia

http://www.ted.com/talks/zimchallenge.html and the readers notes attached thereto, like for example:

“Lets stop defining males by perceived deficiencies in their psychological make-up and redefine the male archetype based on the positive traits that have been suppressed or denied for generations. We will all be better for it.”

Radical lesbian feminism: Coming soon to a public classroom near you? (23 July 2014)

The real gender gap scandal: Why boys are now the true victims of discrimination (8 August 2009)

NUS double-talk on university admissions: A classic of the genre (15 August 2014)

http://www.reddit.com/r/MensRights/comments/29fca6/during_prom_season_at_my_school_were_actually/ All boys sent to ‘do not rape’ class, whilst all girls sent to self-defence class

The guys crisis: Boys are falling badly behind the girls at school (16 June 2014)

Reddit/mensrights discussion thread about bullying of boys at school

What schools can do to help boys succeed

If you’re wondering what’s wrong with men, here it is (execrable sexist article which asserts men are falling behind academically because they are lazy and stupid … but the many good readers comments are well worth exploring)

” … was in teaching program as a male for elementary level children.

the rampant sexism and attitude i received made me leave the program after a couple of years. At every step I was told it was “great” that I was interested int his as few men were involved with elementary education.

the worst part wasn’t that i was discriminated against. the worst part is that the program was filled with feminist/sexist women who all fit into the same category. slightly overweight, smart in school but slightly geeky and want revenge for not being the popular skinny girl… every one of them quite shallow, self righteous, “feminist without understanding feminism” and really fitting into a “type”. It was an eye opener.

there is really a certain type of person that is drawn to certain types of career. It is sad and scary that our children are all being taught about the world by this type of women and i really feel that all our boys are being taught that they are second class citizens who are wholly subordinate to ANY women’s demands.”