There is no ‘debate’ to be had over the existence of male privilege, by Ruby Hamad (1 June 2017)

Do you think women will ever recognise their privilege? (23 December 2016) Reddit men’s rights discussion thread.

Is it ever possible to accept victimhood as a man? (7 October 2016)

The truth about male privilege, by Stefan Molyneux (27 May 2015) Video

Louder Than Words: What Modern Feminism Has Actually Achieved (3 June 2015)

How can you be an anti-feminist? Do you not believe in equality?

Why do white men have any right to give their WHITE MAN opinions about non WHITE MAN issues?

A while ago I came across a US state program that was designed to encourage males to have respect for women. The organisation ‘A Voice for Men’ responded with a provocative and graphic statement along the lines of “we’ll have respect for those people who are deserving of respect”. Read the comments that follow the pictures to capture the essence of the ensuing discussion.

David was one amongst the many feminists and camp followers to bite back. David’s article concluded with the statement:

“The logic here is airtight: because some women get drunk and urinate in public, women don’t deserve respect.

I guess men never get drunk and urinate in public, or ever do anything vaguely embarrassing that gets caught on camera?

Is it really asking too much to respect people as people, foibles and all?”

Well David, yes it is too much to ask of feminists apparently. Can you name even one single male “foible” that feminists are willing to accept?

Men do some gross things, and its usually no-one’s fault but our own. The difference is that we admit it instead of denying it to maintain a moral high ground above the opposite sex … or alternatively blaming our behaviour on someone else or some mythical matriarchy. Hell when some guys really go too far we even express pointed criticism of their behaviour, and urge them to lift their game. Another significant point of difference, yes?

If feminists were truly into equality then surely they would support a reciprocal program that urged girls and women to ‘Respect men’. No? What’s that I hear? Guffaws of laughter instead? Telling, isn’t it?

I guess one gender must be more equal than the other, or something.

UCSC Girls: College Boys are Creepy, Arrogant, and Suck in Bed (17 April 2017) USA. So much respect

YouTuber promises to release sex tape (23 January 2017) Feminists can find the time to criticize men on the basis of just about anything, but criticise a woman for eroding respect for women? No way, well not unless they are conservative and/or anti-feminist.

Stripper: There are many girls like Stacey (8 January 2017) Australia. Not seeing any thing here along the lines of an admission of greed, amorality and reckless stupidity. Yeah, girl power

Former wife of All Black talks about ‘rampant temptation’ players face (7 October 2016) Notice there is not even a hint of criticism directed towards the girls/women throwing themselves at the players.

My husband forgot Mother’s Day flowers, so I had sex with someone else (2 May 2015)

The Scarlet Manifesto: The Rise of the Adulterous Woman (13 October 2012)

“What happened to the modern man? I think he got left behind and died of starvation because I don’t see any around these days. I went on a date the other night, shocking right? But when the dinner came to an end and we were laughing away into the sunrise and the check came out- he slid it towards me. If you need to re-read that last sentence then please do so now.

Ahh yes, he slid the check to me and asked to split. The worst word in the English dictionary. Right next to debt and vegetarian. I mean, nobody wants to split their pants, their hair line, alcohol, or especially, a check. Don’t get me wrong, I’m not some mega bitch, but guys will always make more money than girls.” (Source)

Why feminists hate debating anti-feminists (26 August 2016) Feminists feel entitled to not have their opinions challenged because only they can know their experience as a woman. Although they see no such contraint to understanding/explaining/judging men’s experiences.

Why are feminists absolutely obsessed with entitlement? (11 April 2016)

The fickle face of feminism: Women are fine with sexism… as long as it benefits them, says new study (5 February 2016)

Feminists Are Wrong, Women Are More Privileged and Entitled to Space (5 November 2015)

The most ungrateful woman in the world (24 April 2013) Video

The Reality of #GiveYourMoneyToWomen (31 May 2015)

Chivalry but equality: The feminist double-standard, by Prentice Reid (21 April 2015)

How the feminine imperative “just happens” by Dalrock (26 December 2012)

White House meets with activists calling for gender equity in My Brother’s Keeper (15 July 2014) The current US administration shamelessly panders to the feminist hierarchy. They finally introduce one (1!) program aimed at helping males, and even then they had to exclude white males because of the anticipated backlash. Were feminists willing to make this one small concession? Oh no. Let’s not worry about the scores of pre-existing programs from which males are excluded. It’s pathetic, it really is. When are people going to wake up to what is going on?

Psychologists find that entitlement predicts sexism, in both men and women (7 June 2014)

A Middle-aged Princess grows up

What A Shame!Gold Diggers In Training Mothers Teaching Their Little Girls To Marry For Money (21 February 2010) YouTube video 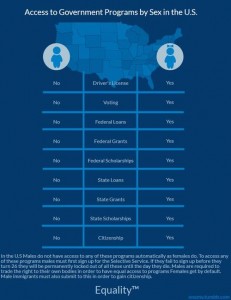 Some related posts within this blog:

Female privilege check-list
If feminists have a genuine case then what’s with all the distortion, lies and exaggeration?
Persistent pro-feminist and anti-male bias in the mainstream media
Karen Straughan and others on feminist shaming tactics
Men in the media. Haw Haw Haw! The jokes on us