Why is there is never any mention of toxic femininity when (to varying extents) many of the same issues apply? Just look at my posts on for example, female violence, lack of empathy, sexual abuse by women, and damseling and the shameless exploitation of male chivalry.

The articles below all address the concept of masculinity, alternately either from a feminist, egalitarian, MHRA or another alternate position:

The words Will Smith didn’t need to say in his latest apology (2 April 2022) The female journalist implores readers to go easy on Will (for many reasons as listed).  The journalist uses the term ‘toxic masculinity’ but then states that “In no way, shape or form did Smith’s actions harm the people attending the Oscars, or anyone watching at home.” Whilst it’s rare to see people being asked to show empathy for men, what’s the bet that it’s only happening here because Will is perceived to have ‘done it for a woman’? #WhiteKnight

‘Will Smith, we don’t need men to protect us’ (28 March 2022) Meanwhile, in real life and starting immediately after Will Smith hit Chris Rock, the media began exposing women stating things like “Gee, I wish I had a man to protect me like that!” #EyeFlutter

Gender Self-Confidence as a Protective Factor for Suicide Risk: Analysis of the Sample of Lithuanian Men (23 May 2022)

Oh but men commit 95% of all violence, blah blah blah (18 March 2022) Some real stats about the prevalence of male violence

How much do you know about male psychology? (2022) Video

Is toxic masculinity the reason there are so many climate-hesitant men? (13 November 2021)

How Has Feminism Been for Young Men, with Tristan Glosby // Men are Talking Podcast – Episode 1 – YouTube (7 July 2021)

Stop Emasculating Men, Then Wondering Where All The Good Men Went (thefederalist.com) (14 June 2021)

The pandemic of male loneliness (24 February 2021)

Andrew Cadman: We are paying a high price for the feminisation of Britain (3 August 2017)

Delingpole: Too Much ‘Maleness,’ Complains Feminist Reviewer of ‘Dunkirk’ (2 August 2017)

We’re doomed and only women can save the day (20 July 2017) How men think of, and treat other men, is part of the problem.

Feminist Prof: Cats are the solution to ‘Toxic Masculinity’ (15 December 2016)

No Gender December: When did ‘gender’ become such a dirty word? (13 December 2016) Australia

If gender is a social construct, why aren’t women ever accused of exhibiting toxic masculinity? (9 October 2016) Reddit discussion thread

What will feminists accomplish by defining masculinity as toxic and pathological? (8 October 2016)

This Woman Never Looked At Her Fiancé The Same Way After He Abandoned Her During A Violent Mugging: Toxic lack of masculinity? Reddit discussion thread and linked article.

It’s not Muslims or people with mental health problems who are most likely to kill you in a terrorist attack – it’s men, by Janey Stephenson (28 July 2016)

Oddly, there has recently been other articles very similar to this one published in different countries, but with ostensibly different authors. See ‘What mass killers really have in common’, by Rebecca Traister (17 July 2016) and ‘One group is responsible for America’s culture of violence, and it isn’t cops, black Americans, Muslims or rednecks. It’s men‘, by Melissa Batchelor Warnke

And here is an MRA response to the type of article listed above: ‘The bizarre feminist response to Islamic terror in Orlando‘ (27 July 2016)

As a female college student, what can I do to empower my male friends who are (seemingly) very emasculated and don’t stand up for themselves? (9 May 2016) Reddit mensrights discussion thread

Violence in Men vs Women. Things aren’t how they seem (6 May 2016) Reddit discussion thread

Although the vast majority of people who risk their own lives to save others are men, this BBC article doesn’t mention that this is mostly a male behaviour. Every time there’s a mass shooting or a terrorist attack, feminists blame “toxic masculinity”. Why they don’t talk about ALTRUISTIC MASCULINITY? (5 December 2015)

It’s time to do away with the concept of ‘manhood’ altogether (29 October 2015) Nauseating pieces penned by mangina journo for The Guardian, but which attracted plenty of reader’s comments

‘Real men don’t hit women’: The big problem with Malcolm Turnbull’s anti domestic violence message (10 October 2015) Australia. I agree with the prolem with the ‘real men’ message, but much about this article is wrong, not least the assertion by Michael Salter that female violence only occurs in the context of self-defence, and that the fact that most people in jail are male is proof that men are responsible for most crime.

Are today’s standards for being a ‘real man’ leading to violence against women? (8 October 2015) Australia. But what of violence BY women?

How to stop mass shootings (2 October 2015) and related https://www.reddit.com/r/MensRights/comments/3n8xmn/new_from_milo_yiannopoulos_on_the_root_cause_of/

Masculinity is more than a mask, by Christina Hoff Sommers (13 January 2014)

The End of Men, by Hanna Rosin (July/August 2010 edition of The Atlantic) 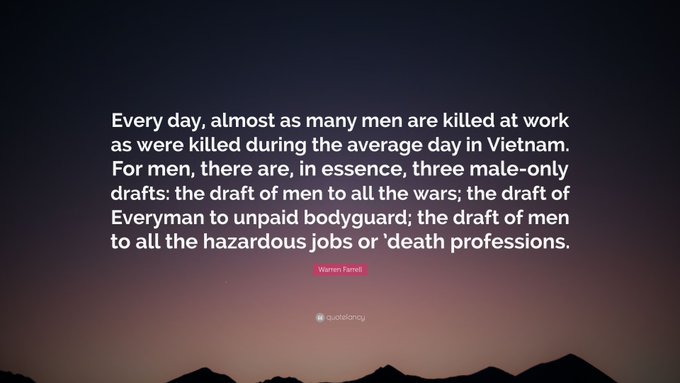 Further sources yet to be reviewed:

Further posts within this blog that may be of interest:

On being male or female (incl. innate differences, stereotyping and so on)

The Elliot Rodger tragedy co-opted as a feminist bandwagon