The contemporary version of feminism is not a movement devoted to achieving equality – as its proponents so vociferously claim. There are many areas where feminists have achieved policy and legislative changes that have swung the balance of power very much in favour of women, and yet they still argue for further reforms on the basis of their ongoing alleged victimhood.

As time permits I plan to identify and precis a selection of articles on this topic.

To start the ball rolling, however, take a look at these three great articles  by well-known anti-feminist writer, Janet Bloomfield:

The first article is entitled ‘Feminists care about equality? Bullshit. They stand directly in the way of it‘

The second article is entitled ‘Five rights feminism delivered for women, but doesn’t want to share with anyone else‘. It’s language and tone might be a bit intense for some readers, but it does provide an interesting and valid perspective on the gender debate. Have a browse amongst some of Janet’s other great articles while you are visiting her site.

The third article is entitled ‘If Feminism Is About Equality, Why Do Feminists Oppose Equality?‘ (7 March 2015)

Start a conversation (2016) A set of publications produced by the respect.gov.au initiative. The one-sided nature of the respective rights/obligations of boys and girls set out in these documents almost defies belief. Essentially boys are obligated to respect women/girls, whilst women/girls are obligated to demand respect. Gender equality? Nothing close. This package is nothing more than a taxpayer-funded feminist wet dream.

Do women really want equality? by Nikita Coulombe (12 May 2016) USA

If Feminism Is About Equality, Why Do Feminists Oppose Equality? (6 March 2016) USA

It’s the £30bn cut you’ve never heard of. And women are bearing the brunt (26 February 2016) Yes, another one of those ‘equality only when it benefits women’-type of articles. This one about making the retirement age the same for men and women (although they don’t actually mention that … funny thing)

“If they want true gender equality then,

1.    Do not have any gender biased scheme, be it education, occupation or any other sphere of life.

3.    Punishment for crime cannot be gender based. Principles of true, actual and absolute gender equality require that equal punishment be awarded to both men and women for the same offenses committed.

4.    Equal participation of women in all risky, dangerous and menial jobs like combat, mining, plumbing, painting, construction of building etc.

6.    Abolish the concept of alimony and maintenance for all women who are educated 10+. There are enough jobs available for all people who have studied more than class 10. If men can find one, so can women.

8.    No special budget should be allowed for women else allocate equal budget specifically for men.

10.  No automatic license to commit violence on the basis of gender …”

35 Practical Steps Men Can Take To Support Feminism (14 June 2014) These sorts of articles are fairly commonplace … list of things that men should do to please feminists. Of course if feminists were really into equality then they would write articles about corresponding commitments that women should make to men. But of course they don’t. Ever

Gloria Steinem says feminism is not about equality 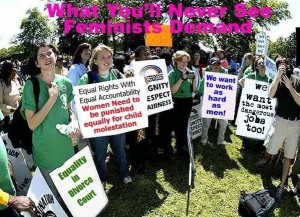 Related posts within this blog

About feminism & feminist antipathy towards the rights of men
On the censorship of non-feminist perspectives and opinions
Not all feminists are like that (NAFALT)
If the central tenet of feminism is equality then what mens/boys causes have feminists championed recently?
Are feminists committed to equality for all women?